WHAT IS ROAD RACING?
The club is affiliated to British Cycling under whose umbrella most of the Road Racing in the area is run. The club is in the South East region of British Cycling. The majority of the races in the area are promoted by the Surrey Cycle Racing League to which the club is also affiliated. The Surrey League promote a full calendar of events from February through to the end of October. 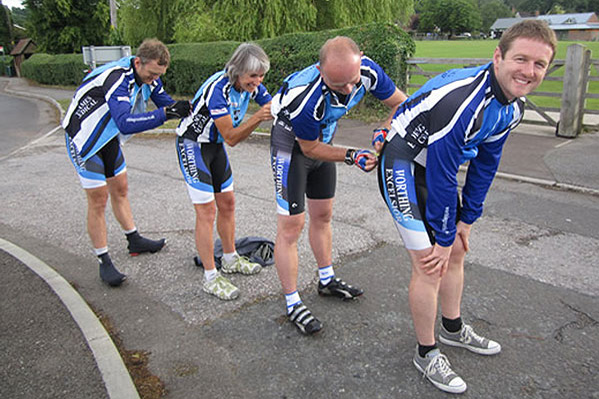 HOW DO I GET STARTED?
You will need to be a member of British Cycling and be in possession of a racing licence. If you are a new member of the club you can obtain free bronze membership of British Cycling for your first year. To find out more about the various membership packages visit the British Cycling website. There are five categories of rider, Elite, First, Second, Third and Fourth category. As a new licence holder if you are over 16 years of age you will be issued with a Fourth category licence. Progression through the categories is achieved by gaining points for placings in races. If you are aged between 16 and 18 you are classified as a Junior. If you are under 16 you are classified as a youth rider. As a youth rider the licence is free with membership and all riders are categorised by 2 year age bands running from under 16 to under 8.
As well as a licence you will need a standard road bike. Hard shell helmets are compulsory in road races. You also need to ride in your club colours when riding road races, although fourth category and youth riders may ride in any jersey and shorts
THE RACING
Racing is held either on the open road or on closed circuits. As a youth rider all the racing is held on closed circuits. The local closed circuits which host racing are Goodwood Motor Racing circuit, Dunsfold airfield, Hove Park and for youth riders only, Angmering Raceway. Further afield there is a new purpose built circuit - Cyclopark at Gravesend in Kent, opening during the 2012 season.
WHERE DO I FIND OUT ABOUT THE RACES?
The British Cycling Calendar on the British Cycling website lists all the events and includes sportives and reliability trials in the listings. The events are also listed in the quarterly calendars which are sent free to all gold members of British Cycling. A Calendar of events promoted by the Surrey League can be found on the Surrey League website.
Copyright © 2016