WORTHING EXCELSIOR CYCLING CLUB
When founded in 1887 during Queen Victoria's Jubilee year, the "Worthing Working Men's Excelsior Cycling Club" was in time to see significant changes in bicycle design and performance that was to lead to greater freedom, comfort and speed, even on those rough turnpike roads and tracks of Victorian Sussex. About that time the chain driven 'Safeties' were beginning to supersede the 'High Bicycles', and models with gears and patented Dunlop pneumatic tyres were becoming available.

After some two years of (so far) unrecorded annals of those earliest intrepid Excelsior's John Grant, who is researching the club's history, informs us that eleven members (several who had ridden 'Boneshakers' in the still earlier days) did indeed meet at the top of Washington Bostal one September evening in 1889 and decide to put the club on a more formal footing. The local Downland hill has a special place in the club's history, and is still used today for the starts of the very popular ten mile time trial series. 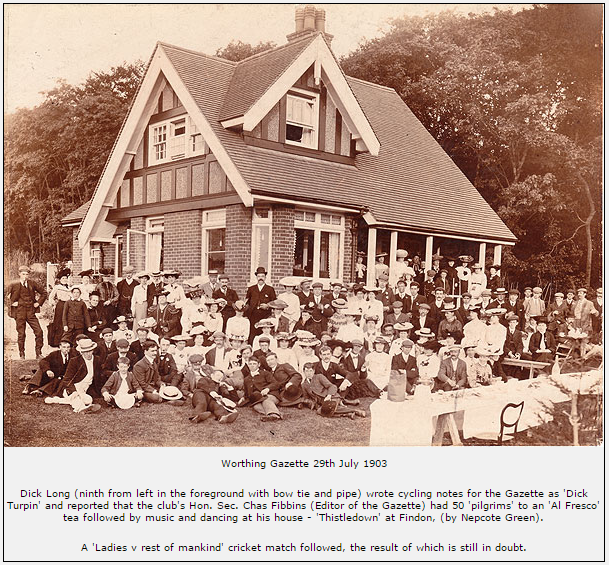 Whilst the Excelsior has always had a prominent social side- an attribute which makes it a most enjoyable and popular club today, it is still in keeping with its primary aim- the furtherance of cycling as a sport and hobby, which included organising major sports meetings, often at the invitation of Worthing's Councillors. The consequent influx of athletic members led to a reconstitution in 1903 as a cycling and athletics club; surprisingly, apart from a short lived Harriers Club in 1894, Worthing athletes had no club of their own until shortly after the first World War. 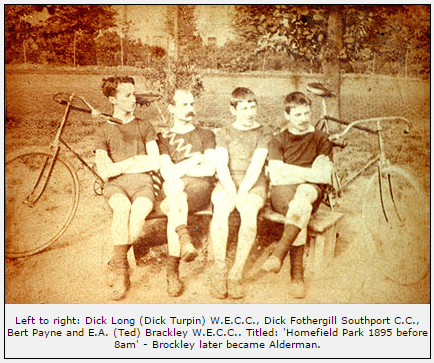 Excelsior, from the Latin excelsus means higher, and as used by Longfellow, an expression of incessant aspiration after higher attainment. Well, the club has certainly grown in recent years, but the growth and quality of club records or achievements has not been incessant (1986 being an exception with eleven new ones) but the future could well change that.

The Excelsior Club had a different meaning in 1884 when an anti-temperance mob of 4,000 calling itself this- or the skeleton army attacked the Salvation Army's headquarters in Prospect Place and a shop in Montague Street, Worthing. Times were hard for the labourers then, and the 'demon drink' was some relief no doubt. When Biggs junior (his father had a hand in the design of the early 'Safeties') proposed the name Excelsior for Worthing's Cycling Club at a meeting some year's later; the discussion that followed must have been interesting to say the least!
​
Gone now are the days of temperance and long working hours. Even so, can any one measure the sheer joy and liberation experienced by those early club cyclists in a car free world during their precious free time off? 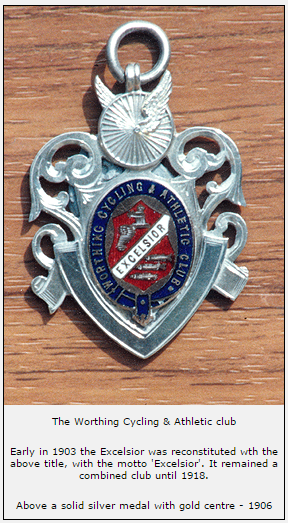 The social history of the bicycle has yet to be written, but when it is, the most efficient machine may prove to have had an important influence that most historians have overlooked- not least in this art of the world.

Before the extraordinary growth in personal and commercial motor powered traffic along the south coast; before the motorway system and the elements of traffic engineering and control took hold of us, and before the movements and growth in population- and fast food made their mark, public transport, whether bus, tram, train or bike, was the norm for most.

Excelsior Club members regularly used their 'muscle-powered traffic' to ride to events- often carrying their sprint wheels and saddlebags for weekends or longer trips. For many it was family or social outings, using the facilities of the C.T.C and Youth Hostels at a more leisurely pace.

Now that the pace of our lifestyles and the resulting stress has reached such 'records heights' we can look back with nostalgia and some pride from our 'vantage point' in this Centenary year to the many activities and events that the club was involved in, not only road and track events of all kinds, but the many enjoyable tours in this country and overseas; to the pre T.V. and video days of picnics and strawberry feasts, concerts and musical evenings, home entertainment- and home cooked organic food! and to celebrate the gentle impact of the bicycle on the surrounding environment of Worthing.
​
The following records are by no means complete. Like most things are prone to bend and change with time, but for interest and inspiration- and for what it is worth- this is the striving part of excelsus.
Copyright © 2016