Both riders go inside the 24 min benchmark on this undulating Surrey Hills dual carriageway course.

Four WECC riders took to the start line for the SCA 30 Mile championship, incorporating the WECC club 30 mile event. Andrew Lock, Ian Cheesman, Spencer Kirkham and Huw WIlliams were the brave souls. Whilst the winds were light and the temperature a very nice 17 degrees, rain was threatened and it didn't disappoint so it ended up being a very wet event.
​
​Cheesy was very pleased to ridden a PB for course and distance by over 2 minutes and Spencer also PB'd as he'd never ridden a 30 before! Not sure what the reasons for DNF were but as both of their cars were gone from the car park I'm assuming that it was mechanical rather than crashes.

Spencer and Huw enjoyed the fine weather conditions. Huw recorded a PB, and Spencer rode his fastest 25 since 2019.

An encouraging promotion (yet again) by ...a3crg as they prevent the P881/10 course being swamped by super fast riders and allow mere mortals to have a crack at it. Starting places were given to those riders with the slowest LTS.

Nolan and Andrew took advantage of the course and the benign conditions. Nolan recorded his fastest 10 of the season, whilst Andrew gained a PB.

The popular A3 based 10 course comes into play for the first time this season and Spencer takes advantage to record his fastest open 10 time of the season by almost a minute.

​Three riders from WECC took to the start line so that we would have a team of three. Whilst the wind was a light to moderate SSW the rain was biblical at times with lots of standing water on the course so memory as to where the numerous potholes were was important.

Cheesy gained a personal course best for G25/89 by over a minute. This was despite the recent addition of another chicane roundabout on the course.
Clive Patterson-Lett did even better. It was his first 25 mile event for 4 years and he beat his previous PB of 1:04:53 by 50 seconds. Having already ridden a 50 he just needs a 10 time for a score in the vets BAR competition.

​Ian Cheesman takes the WECC 50 title for the second time in three seasons and was almost three minutes quicker than his 2019 time on the same course. It is also the quickest of his two attempts at the distance this season and so consolidates his leadership for the Richard Shipton Trophy (which he has won previously in 2017).

The maximum points gained in both the scratch and the veterans rankings move him to the top of the series leaderboards. Colin Toppin also gained useful points.
​
Trevor Leeding was unfortunate in being a DNF in this club championship event for the second season running.

A very creditable 14th place by Spencer, and Huw saw a 9 second improvement on his time on this course 3 weeks ago.

Today saw the ever popular H25/8 course near Bentley in Hants playing host to Farnham Road’s Club’s 25 mile event for 4ups, 2ups, & solos.  The event proved very popular - 15 4up teams, 17 2up teams, 1 tandem, 12 women solo & 22 men solo…and even 13 reserve riders as the event was over-subscribed.  Its great to see so many ’teams’ assembling in the time trial world, which can at times be a very solitary old sport !

WECC fielded a team in the 4up with Spencer Kirkham, Nolan Heather, Trevor Leeding, & Colin Toppin making the trip to fly the flag for the club.  A very warm & calm day greeted the riders; a blessing from the cold & breezy conditions of some of the earlier season's events this year.

Spencer was road captain organising us into a running order for the day, and with some decent training miles in our legs this year courtesy of all 4 riders being ‘lab rats’ from Simon Steeles coaching plans, we gave our best shot on the A31 course which was pretty busy with traffic on the day.

Official results aren’t yet published at the time of writing, but we stopped the Garmin with a respectable 55:22 when we crossed the line - it was a first 4 up for this WECC posse, with none of us haven ridden in a 4up of any sort for some years with such events being less common in the calendar these days.  Times are taken on the 3rd rider across the line in a 4up, and the elastic snapped a bit for Trev who went on to finish with a very strong mid/long 58 - as he said himself he carried on in case we needed a bike swap in case of a puncture or something - now that’s a team player !  A good morning all round.

​Early on Sunday morning near a sleepy East Sussex village, the sun was shining with a light SSW breeze in attendance as were a number of Lycra clad warriors ready to do battle on the ESCA 50 Mile TT Championship course. Three riders from WECC were scheduled to take the start on this "grippy" and lumpy course but Sadly Nicole Patterson-Lett was unable to start due to a swimming injury. 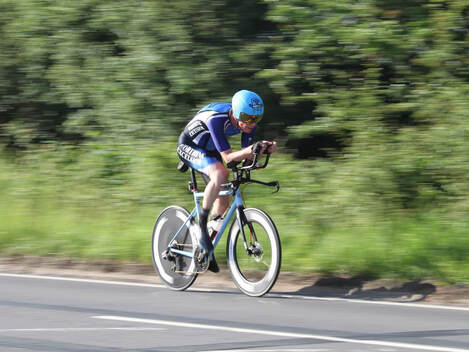 Saturday 12th June 2021 was the SCA 15 mile TT (incorporating the WECC 15 Mile championship) and finally we were blessed with a light breeze and nice temperatures. Seven WECC riders were due to take the start line in a full field. A good race for all and again WECC delivering respectable rides.

A good evening with John finishing 15th out of 45 (in his best P917 time so far this season), and Karen finishing 6th out of 10 riders.