Juniors are encouraged and supported at the club.

​A good starting point is the Sunday morning club ride where they will be put into a group to suit their abilities and will learn how to ride safely and in a group. They will also learn many aspects of caring for their bike(s) and themselves.

​For those that are keen to take things further the club's Don Lock Memorial Evening 10 Series (held on Thursday evenings) is a good introduction into racing. More details are available here.

OLIVER LANE:
New to the club in 2017 Ollie has shown great enthusiasm and is entering into all sorts of activities. He has competed in the early season Ashurst time trial and the 10 mile handicap time trial, and is now looking forward to the evening 10 series. He also participates in the Tuesday evening training laps that are organised by the club and is improving his all round bike skills as a consequence.

CHARLIE FOSTER:
Charlie is another new entrant for 2017. He stepped straight into the deep end, competing in an Open time trail (the Farnborough & Camberley 10. in a field of 150 riders at Bentley he acquited himself superbly. Using a road bike with clip-on aero bars (kindly lent to him for the season by Andrew Lock) he did extremely well to go just inside the 25 mph mark with a fine time of 23:57. This was actually bitter sweet as he is looking for a time of 23:56 as part of his A level marking for the year but it would seem that he will definitely find (at least) the extra second in the not too distant future.

HARRY PASK:
And another new junior rider for this season... Just days after joining Harry competed in his first ever time trial - the club's early season Handicap 10 - and we wish him well as he develops during the coming season. 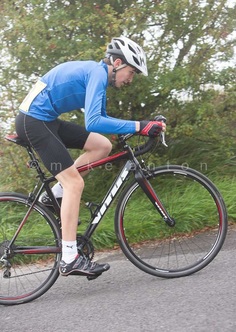 Aaron is one of our newer members, having joined during 2015 with his father David. Clearly distance and endurance is no problem as they had both just completed a John O'Groats to Lands End ride.

It seems that he can do shorter distances too. He competed in the club's Evening Hill Climb Series (held on Thursdays during August) and then went on to compete in the Sussex CA Championship Hill Climb on Steyning Bostal. The picture here is of Aaron in 2015 on the particularly steep part of the Bostal climb (which is where the photographers love to catch the action!).
2016 Update
2017 Update
Just one road race so far - at Preston Park. 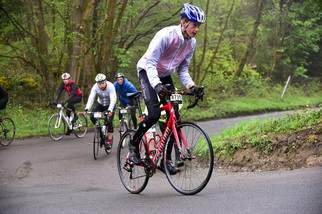 New to the club in 2016 Tom joined with his father Andy. The photograph here shows him riding in the "Ups and Downs 100" Sportive - a 100 mile event over challenging terrain. So he looks to have bags of ability.

​With second place in both of his rides in the club's evening Hill Climb series he secured a fine third place overall.
​
As far as next season is concerned - in Tom's own words: "I'm looking to give the evening 10's a go, the circuit races at Goodwood, the hill climb at Washington, and potentially some of the Gorrick cross-country mountain bike races in the spring." 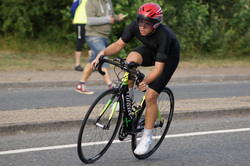 Schaeff is a real enthusiast and enters into all aspects of the club's activities.

​As well as his undoubted prowess in time trialling he is a regular at the Sunday club rides, the weekly club meetings and enjoys the special events such as the club's Ghent Trip.

His development over the past couple of years has been a pleasure to see.
In 2014 he tried his hand at the Evening 10 series and the average time for his 9 rides was 27:17 with the slowest being 29:55.

In 2015 despite a late start due to the very necessary attention to exam preparation he went from strength to strength and his enthusiasm and dedication were rewarded by that most critical of judges, namely the timekeeper’s stop watch. Five personal bests were notched up as his times have progressed through the 25s, 24s, 23s and onto a landmark 22:56. Schaeff benefited from members' support when some got together to help him buy a good quality road bike (as seen above).

He also won the London South District heat of the GHS Junior 10 Competition, thus qualifying for the National Finals held in Hertfordshire. For that event members helped him out with the loan of a time trial bike and a speedsuit so that he could ride at his optimum.
2016 Update
2017 Update
Schaeff switched to second claim for us, having received a lucrative sponsorship package to ride for Norwood Paragon's youth development team in 2017.