Since the inception of this event in 2014 each year Robert Downham organises team entries to the London 100 on behalf of the club through British Cycling. 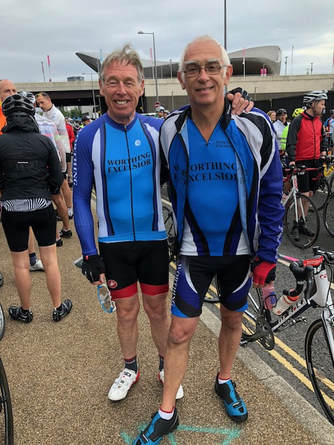 NB Gail Hadlow rode in the place of Nik Allen

REPORT FROM 2016 EVENT
We had applied for 5 teams through the Club Challenge this year, but only got one team allocation, so the team was made up of Pete Logan, John Baldwin, Kevin Doe and Robert Downham. Due to issues with Kevin’s back he deferred to next year. 3 other club members had also got individual places, these being Rocco Sepe, Mike Sturt and Ken Newton, Ken did not ride due to an earlier accident.

So to the weekend of the 30th/31st July itself, for Pete, John and Robert this started with a morning trip up to the ExCel Centre in London, leaving Worthing at 7:30 to complete registration and collect our numbers followed by a look around some on the stalls. Then back to Worthing by 1:00 to then get bike and kit ready for Sunday. Rocco and Mike went up in the afternoon as they were staying up in London overnight.

On Sunday morning Robert picked up Pete at 2:30 and then John at 2:45 for the drive up to Surrey Quays shopping centre where we had book the car into the car park for the day. We arrived at around 4:30, we then had our breakfast consisting of porridge and got ready for the ride to the Olympic park for the start, arriving there just before 5:30. Our start time was 6:28. Rocco and Mike at a start time of 6:00.

So at the start you are put into you start waves (groups of about 500), then at 6:28 we were off, out onto the closed roads of London and Surrey. The route through London took us past Canary Wharf, Tower of London, Trafalgar Square and along Pall Mall towards Richmond Park. From there it was on to Kingston Upon Thames, Walton-on-Thames, Weybridge, Byfleet, Ripley, West Horsley, Newlands Corner, Forest Green, up Leith Hill, Dorking, up Box Hill, Leatherhead, Oxshott, Esher, back into Kingston upon Thames, Wimbledon Village, Putney to the finish on the Mall to the applause of the cheering crowd.

It does seem strange riding through the middle of London without any traffic being around, we covered the first 21 miles to Richmond Park in an hour.

Our first stop was at Newlands Corner, 47 miles, where we filled up our bottles and took on board some food, plenty there to help yourself to. We were then met at Dorking, 65 miles, by Barbara (John’s wife) who had made use some Cheese Roll and Ham Rolls (nice to have savoury food after all the sweet stuff) and Ken, we then continued to the finish.

So what were the times in the end, Pete, John and Robert completed in 6:06:13 (this did include an hours worth of stops), Mike in 5:02:32 and Rocco in 4:24:51
​
Overall a great weekend, a well organised event, good weather and plenty of cheering crowds all around the route. 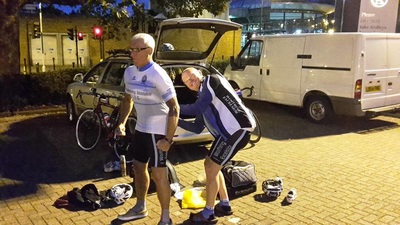 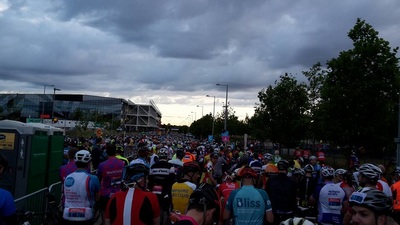 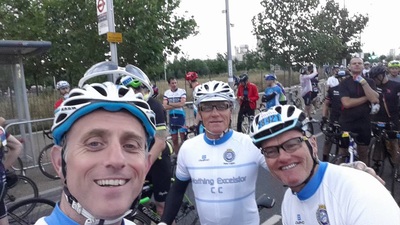 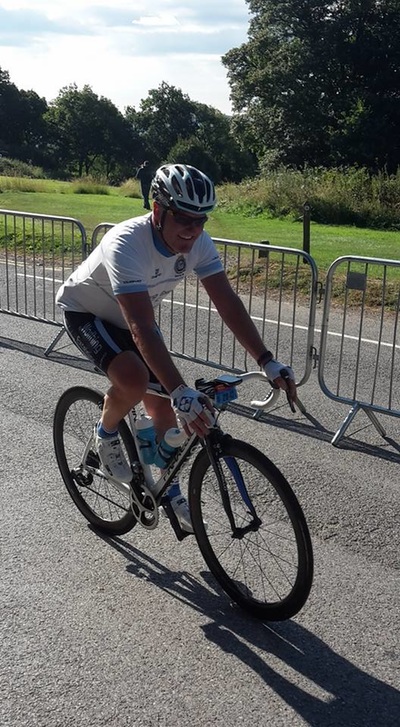 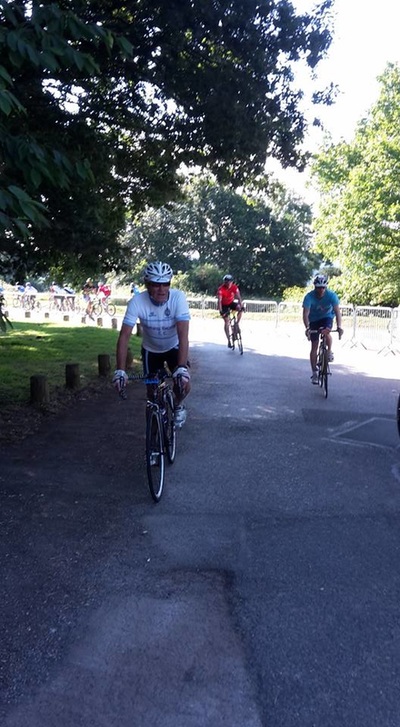 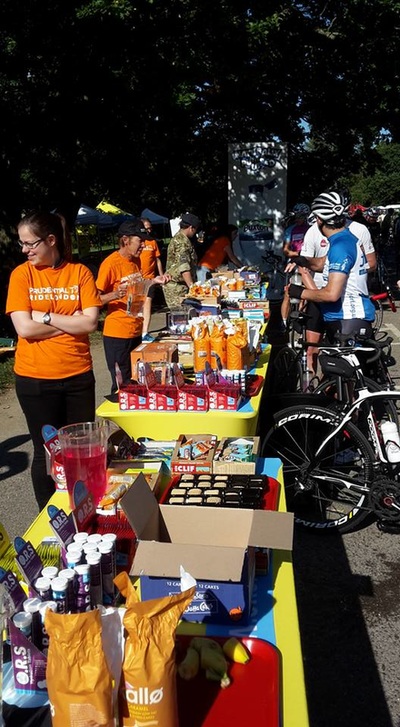 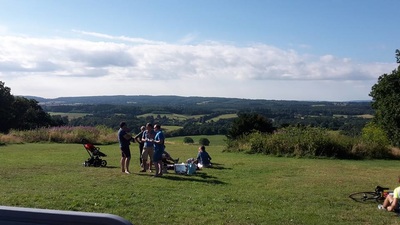 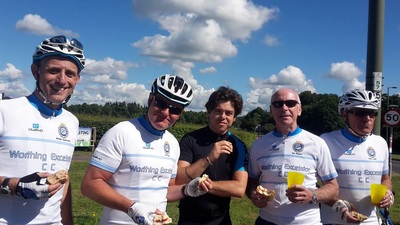 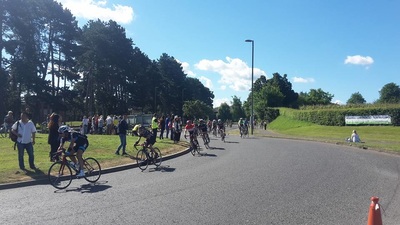 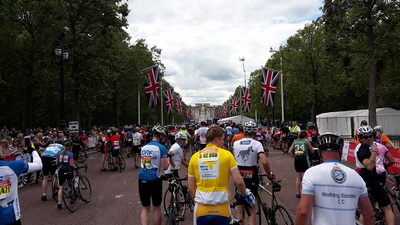 Hover on photo for caption / Click on photo to enlarge 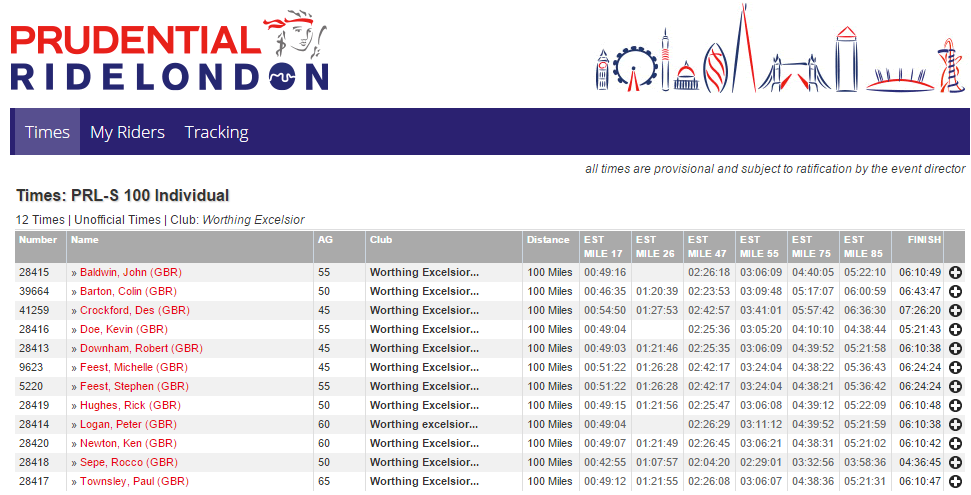 DETAILS OF THE 2016 EVENT
Date of event: Sunday 31 July 2016.
When the ballot is open in February/March Robert circulates our members and asks for applicants. He then submits our request to British Cycling for a number of teams. Subsequently, and based on the number of other club entries, we will be allocated a number of team places.

To help our chances of participation Robert counts the number of club members who express a desire to ride and then adds a couple of extra teams for 'good luck'. In the event we do not get all the required teams requested, he bases our teams on a first come first served basis, so members are encouraged to get their requests in fast.
A team is made up of 4 riders, and we can apply for the following teams,
·         All male teams
·         All female teams
·         Mixed teams
All riders must be member of British Cycling. If you are not already a member you can apply for the bronze level membership which is normally free for the first year.
Copyright © 2016