This  was established in 2014 by members who were keen to have a social trip, do some riding and also to see the Ghent 6 Day Race. It has quickly become an established and keenly anticipated event in our calendar. The organisation is handled quite excellently by Dom Maxwell.

Every year, the very best track racing cyclists compete for the victory in the legendary ‘Kuipke’ cycling stadium. Since starting in 1922, the Ghent 6 day cycling event sees cyclists racing around the clock for six days and 6 nights!
The Ghent Six runs for five evenings from Tuesday to Saturday, and a Sunday afternoon. The racing finishes at either 1am or 2am (6pm for Sunday’s afternoon session).

There are a combination of events including: 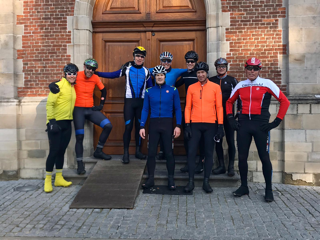 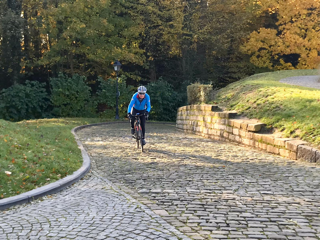 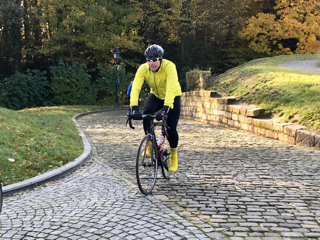 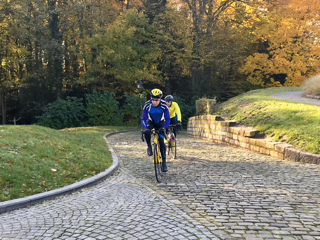 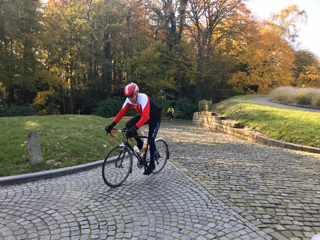 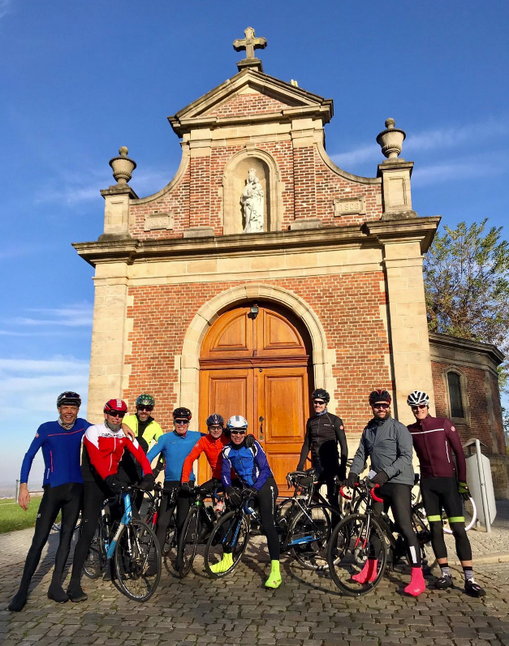 ​Business as usual as the group stayed once again at the Best Western Chamade Hotel having driven straight there from the Euro Tunnel. The hotel is near to the stadium so once again all cycling used Ghent as the hub.

Twenty two members signed up for this year’s trip (Fri 18th to Mon 21st November) and stayed once again at the Best Western Chamade Hotel having driven straight there from the Euro Tunnel. The hotel is near to the stadium so this time all cycling used Ghent as the hub. The aim for many was to complete the Tour Of Flanders Bergs: Oude Kwaremont, Nieuwe Kwaremont, Kruisberg, Paterberg, Wolvenburg, Molenburg, Berendries, Elverenberg, Valkenburg, Steenberg Forest Climb. - plus seeing Cav and Wiggo.
Many thanks go to Andy Haste for an excellent description of the trip:
​Ghent Trip 2016

For 2016 the Best Western Chamade Hotel was once again booked for accommodation in Ghent. This is located a short distance walk to the Kuipke Stadium, restaurants and bars with easy access to cycle routes heading out of Ghent onto the canals and beyond.

Sometime after the 2016 trip was booked it was announced that Sir Bradley Wiggins and Mark Cavendish would be competing together in the 2016 Ghent Six Day in what was expected to be Bradley Wiggins retirement year and possibly one of his last competitive rides.

The confirmation of Cav and Wiggo riding added extra special excitement and anticipation and Captain Leeding set to work designing and ordering some special tour t-shirts for us all to wear.

There was also much pre-trip discussion about the horrible weather that had been experienced on previous trips and what gloves people would be taking in 2016.

The group set off travelling by car via the Eurotunnel during the early hours of Friday 18 November 2016 arriving in Ghent by lunchtime to heavy rain and fridge-like air temperature with a couple of hours to spare before the hotel rooms were due to be ready.

The combination of heavy rain, cold, lunchtime hunger pangs and a hotel check in wait soon had the group agreeing to meet up in a cafe named The Rambler, a very short walk down the road from the hotel to mull over options for the rest of the day whilst enjoying some waffles, coffee and for some a first beer.

It did take some time for the whole group to arrive at the Rambler Cafe. Navigating around Ghent certainly caused some amusement from the off and continued throughout the weekend.

Finding the way from the hotel to a nearby underground car park to drop off the cars and then back to The Rambler Cafe left several of the group enjoying an extended tour of the city by both car and foot before arriving safe but wet at The Rambler Cafe with bitterly cold hands.

Whilst in the Cafe the weather seemed to ease and the general consensus was for the whole group to set off together from the hotel on a ride heading south to Oudenaarde along a canal path with a view to completing the planned Day 1 route that had been carefully prepared by Dom and downloaded with some difficulty onto Garmins by some prior to travelling out to Ghent.

The hotel did an excellent job getting the rooms ready and we were able to check in, change and depart on the Day 1 ride in what was at that time reasonably okay weather given the time of year.

Some more navigation fun was enjoyed as the group immediately chose to ditch the map trails flickering on and off on the Garmin computers and instead followed the confident shout of the one who was later to lead a Day 2 Group ride to Bruges.

As a chorus of beeps was heard and there was rejoice at being back on course the group headed off down the canal path to Oudenaarde. This is when the Ghent newbies were treated to some of Belgium's finest hail, wind and rain and those that had been to Ghent before where reminded of the joys riding in Belgium in November has to offer.

It was cold and wet and daylight time was tight for those wishing to attempt to complete the planned Day 1 route.

Some enjoyed a coffee and snack at Brasserie De Flandrien in Oudenaarde www.crvv.be before heading back to Ghent whilst another group set out to complete the 47 mile Day 1 loop including the Koopenburg and Einburg cobble climbs.

But the riding was memorable nevertheless, especially for those riding the Belgium cobbles for the first time and for those that couldn't remember ever feeling such cold and discomfort.

The wide canal path from Ghent to Oudenaarde offers mile after mile of relatively straight traffic free riding and was like nothing I've experienced in the UK. Experiencing the cobbles, climbs and narrow roads flowing through small villages and open fields with drainage ditches either side with cross winds was exhilarating.

Once all back to the hotel, defrosted, changed regrouped and ready to eat the group made their way via the hotel bar by foot to the nearby Fewa Nepali Restaurant where Dom had pre-booked a table and food. The restaurant proudly boasted 'quality without compromise' on their menu and we looked forward to an enjoyable meal. Some time passed in that restaurant chatting and waiting for our food. Waiting, waiting, waiting but we were eventually fed (just in time). We settled the bill and made our way up to the Kuipe Velodrome now all dressed in Ghent 2016 matching T-shirts coloured Belgium blue with a red yellow and black colour team Wiggins style target on the front.

Fun was had at the Velodrome on the Friday night soaking up the atmosphere, shouting encouragement to Cav and Wiggo and cashing in drink tokens.

Day 2 saw three ride groups head out after breakfast and some stayed to explore Ghent and relax.

The first ride group set out to attempt a 79 mile route including the Wolvenberg, Molenburg, Berendries and Valkenberg.

A second group set out to do the same but at a lesser pace and a third group confidently set out to Bruges looking forward to a relaxing Town square cafe stop.

The Day 2 riding was to be eventful with a couple of challengers for the club 2016 Christopher Columbus Award for navigation errors.

The first group had to stop after one of the group forgot they where in Belgium and navigated a bend on the left hand side of the road and met a Jeep coming the opposite way. Miraculously there was only minor damage to the car and bike and the Christopher Columbus Award challenger managed to pick himself up out of the hedge with only minor injuries and was able to complete some paperwork before riding back accompanied to the hotel whilst the first group continued on to complete the 79 mile route back to Ghent.

The third group I believe set off aboard the Santa Maria planning to head west along a canal in search of Bruges under the confident navigation of another Christopher Columbus 2016 Award challenger.

However, instead of finding a way to Bruges the group ended up discovering by surprise that they ended up in a place named Ooigem some distance southwest of Ghent.

Finding themselves no closer to Bruges than when they set off, the group enjoyed a cafe stop in Ooigem before returning to the hotel with an enjoyable although surprising day had.

When looking at a map the places of Ghent, Bruges and Ooigem seem to form what may now be named the 'Irons Triangle'.

The second group decided early on to reconsider their plans and took a cafe stop in Oudenaarde having picked up a local club rider named Bart (Bert) along the canal path from Ghent. Over coffee and toasted sandwich Bert kindly offered a local guided ride to suit what time/energy was available. What followed was a most enjoyable combination of some local sections of track not straying too far from Oudenaarde or the pre-prepared Garmin trail before exchanging contact details with Bert and heading off back to the hotel up the canal path via a pub stop soaking up some brief sunshine.

Drinking started early for some on day 2 as people started to arrive back in Ghent.

Once all ride groups had returned and changed back at the hotel we all met up once again, this time at The Rambler for dinner before heading up to the Velodrome to watch day 5 of the racing.

The Saturday night racing was again exciting as we continued to bellow out support and encouragement. “Hollywood”, “in your face”, Ghent 6 – That's Entertainment.

We all made our way safely back to the Hotel that night at various times in time for breakfast although I'm sure some further challengers for the Columbus Award may have gone overlooked.

Hats off to those that chose to ride on Sunday enjoying a ride to Oudenaarde and back via a cafe stop tackling 50mph wind gust conditions.

The final day racing was broadcast live on the EuroSport 2 channel and we were informed that we featured in the crowd shots shown on TV all proudly wearing our Ghent 2016 tour T-shirts.

Trevor Leeding was becoming increasingly more convinced Wiggo and Cav had acknowledged us as the race tension and love increased.

The atmosphere in the stadium as the final Madison race neared its conclusion exploded as Cav and Wiggo took a lap with not enough time left for others to respond and then Wiggo set off again to open up another gap before the end.

Events that followed, well you had to have been there... For all of us though, lifetime memories.

Monday's breakfast was jubilant and emotional especially for those that ended up spending some quality time chatting close up with Sir Bradley Wiggins over a beer the previous night.

We had all witnessed a truly remarkable sporting achievement and it was still sinking in over breakfast mixed up with a feeling of fatigue, happy memories and an appreciation of a very well organised fun filled weekend trip away in good company that was coming to a close.

The morning saw us retrieving cars from the car park, packing up and checking out of the hotel after breakfast.

For me there was one final navigation test to complete and that was finding my way back to the hotel from the underground car park which I completed in true Ghent 2016 style.

Hopefully both Columbus challengers noted key clues along the road back from Ghent towards France as traffic flowed on the right and numerous sign posts to Bruges passed by.

Thank you Dom for organizing the trip and to Trevor for the t-shirts. 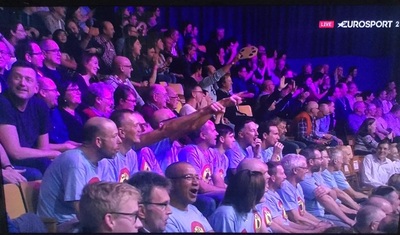 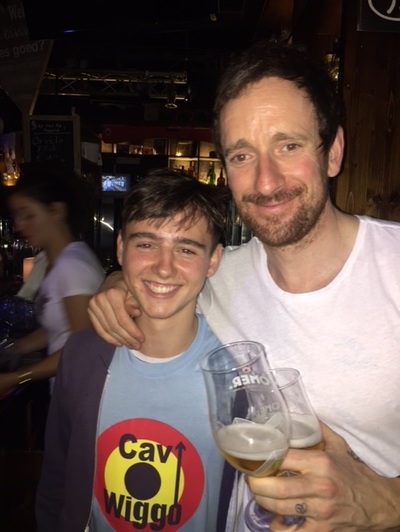 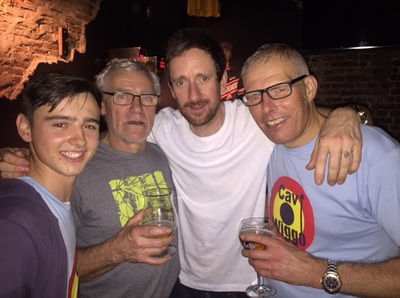 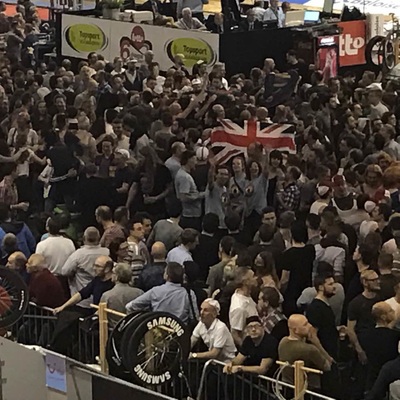 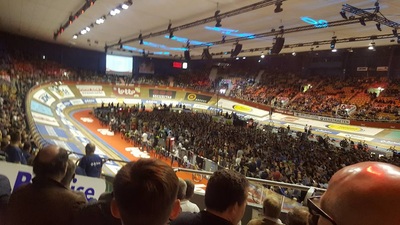 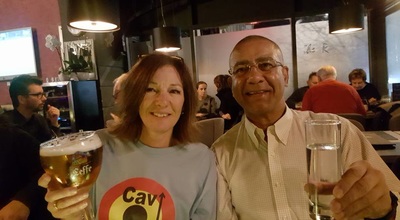 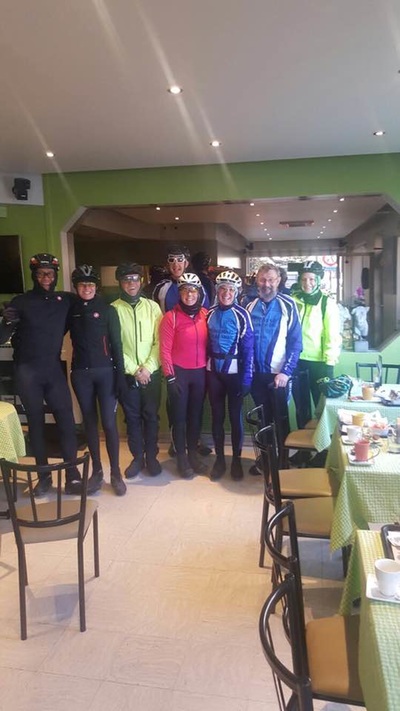 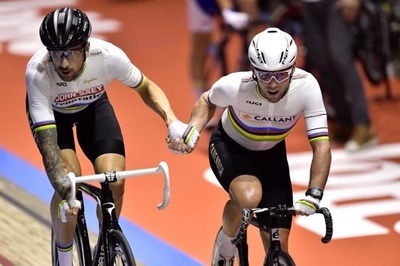 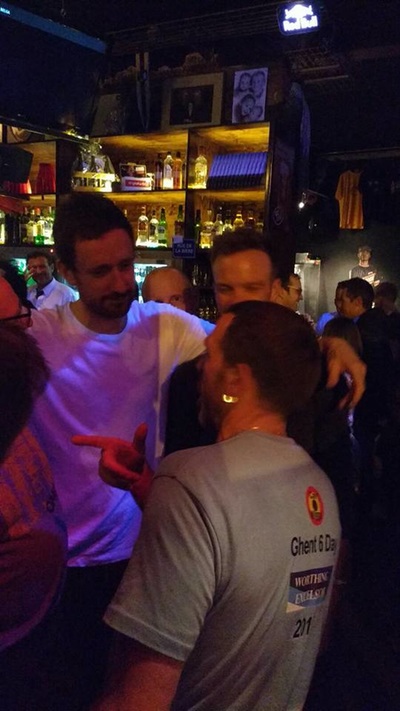 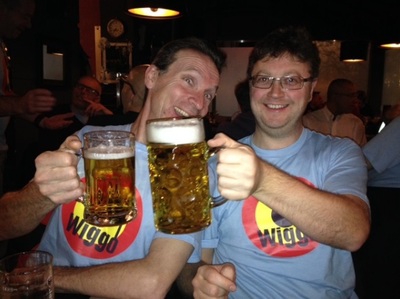 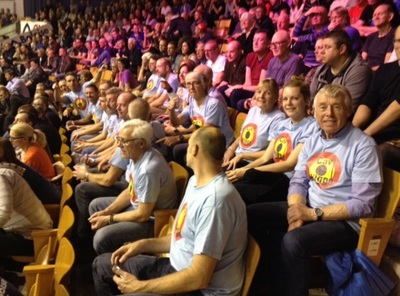 In 2015 (in conjunction with Sussex Revolution) 35 riders participated. The itinerary involved a ferry trip to France; riding from France to Ghent (105 mile route); a three nights stay in Ghent, and a return ride back to France (65 mile route) before catching the return ferry. The long distance rides were split so that riders were grouped with those of a similar speed and ability. The riders tackled 12 sections of pave from the Paris-Roubaix including the infamous Arenberg Trench.

The stay in Ghent was at the very conveniently situated Best Western Chamade Hotel. Photographs of the trip can be found here.